U.S. President Donald Trump and China’s President Xi Jinping leave a business leaders event at the … [+] Great Hall of the People in Beijing on November 9, 2017.

When Donald Trump’s boosters try to rationalize his many failings as a president, many of their arguments tend to run through Beijing.

Sure, there was lots of chaos, Trumpers say, but wow did he ever have . Trump, they claim, really showed President Xi Jinping who’s boss and American workers are infinitely better off for it. Yet the truth is, Xi’s Communist Party will miss Trump terribly for three reasons.

First: Trump was the ideal mark. No, Xi’s men didn’t enjoy the last four years. They certainly could’ve done without Trump’s tariffs in nearly $400 billion of goods, his banning of an ever-growing number of national-champion companies and his Twitter tirades.

But Xi got away without having to alter commercial dynamics that he and his two immediate predecessors used to dominate world trade. Before Trump assumed the presidency in January 2017, he left behind decades of complaints that Asia, in his view, had “systematically sucked the blood out of America” and “.” In the 1980s, Trump directed this language at Japan. Now it’s China.

As Trump leaves office, though, his China trade war is marred by what-was-the-point-of-all-that questions. The U.S.-China trade deficit is by many measures bigger now than in 2016. Data for 2020, to be released in the weeks ahead, may approach , the biggest ever. This makes the tens of billions of dollars of bailouts for U.S. farmers bankrupted by Trump’s tariffs—funded with money borrowed from Beijing—all the more wasteful.

Trump’s “phase one” deal is equally pointless. Sure, China agreed to buy more U.S. goods. But Trump, in his desperation for a win on the world stage, gave Xi a pass on industrial policies that disadvantage America, including big government subsidies for state entities and other non-tariff and regulatory barriers that protect China Inc. Xi saw how hungry Trump was for a deal, any deal, and ran circles around him.

Trump leaving the Trans-Pacific Partnership opened a gaping void that Xi stepped into with the 15-nation . RCEP is the biggest trade deal in history. It linked the fortunes of 3 billion people pivoting toward middle-income status. And it marked nothing less than a “tipping point” accelerating the “regional shift from west to east and the rise of Asia,” says HSBC economist Natalie Blyth.

Xi pushed ahead with the , a giant special enterprise zone, a “Silicon Valley East,” in southern China. It groups Hong Kong and Macau with Shenzhen and eight other municipalities all destined to become economic powers all their own: Guangzhou, Zhuhai, Foshan, Huizhou, Dongguan, Zhongshan, Jiangmen and Zhaoqing.

Nothing about Trump’s taxes on goods or the Federal Reserve’s epic easing moves made the U.S. more innovative, productive or more competitive. The trade war and Republican tax cuts did zero to rebuild America’s crumbling infrastructure, curb an unsustainable national debt surge or improve education.

Trumponomics had a timing problem. It believed policies that might’ve worked in 1985 could sideline a China investing big in where the global economy is heading come 2025. Xi couldn’t have asked for an easier opponent than a White House looking backward. 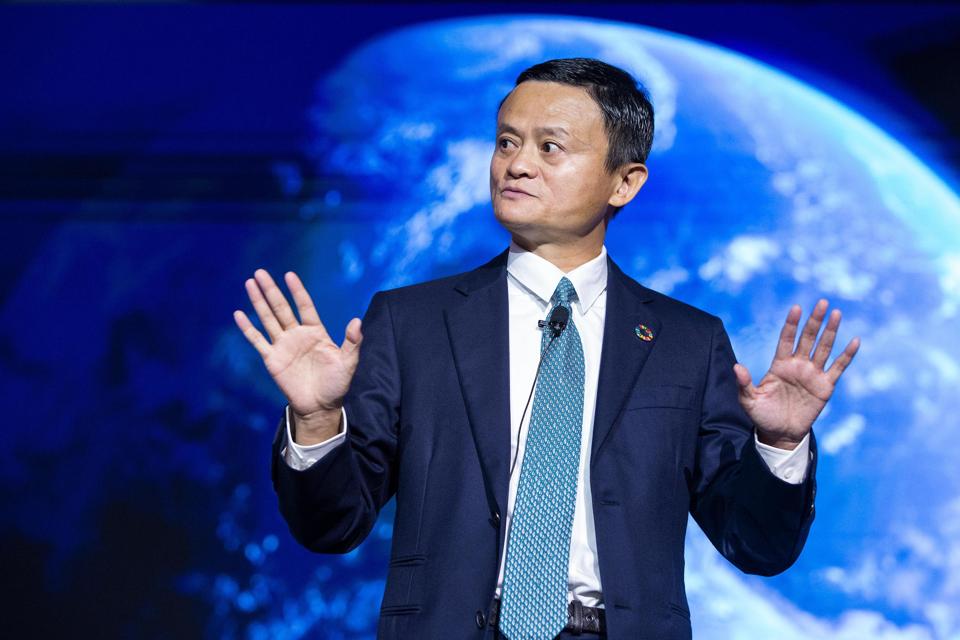 Jack Ma speaks during 2019 Global Conference on Women and Entrepreneurship on August 28, 2019 in … [+] Hangzhou, Zhejiang Province of China.

Third: Trump buttressed the appeal of the Chinese model. Beijing saw a bull market in schadenfreude after pro-Trump insurrectionists stormed the U.S. Capitol on Jan. 6. “We hope that the American people can enjoy peace, stability and security as soon as possible,” said China Foreign Ministry spokeswoman Hua Chunying.

Hua also made headlines accusing Trump of “hypocrisy” and “” and being “hegemonic” about targeting Chinese companies from Alibaba Holdings to Baidu to Tencent to Huawei Technologies.

All this makes the “Washington consensus” versus “Beijing consensus” argument harder for President-elect Joe Biden’s White House to win. In the pre-Trump era, Washington advocated for free markets, transparency and financial liberalization to the developing world. Post-Trump, China may have an easier argument than ever for its illiberal mix of autocratic government, semi-open markets and press censorship.

The U.S. now has a trust problem that China can exploit. Pulling out of TPP, the Paris climate pact, the Iran nuclear deal and other commitments make the U.S. an unreliable partner. So did trying to shake down Tokyo and Seoul for billions of additional dollars annually to host U.S. troops.

There’s also the amateur-hour antics surrounding moves to blacklist more and more Chinese companies at the 11th hour. On Dec. 31, the New York Stock Exchange  it had to delist China Mobile, China Telecom Corp and China Unicom Hong Kong, destroying billions of dollars of wealth—and many a New Year holiday. A few days later, Trump’s people said never mind. Two days after that, they flip-flopped on the flip-flop. The ban was back on after all.

To be sure, Xi’s China is scoring its fair share of own-goals. Case in point: the bizarre disappearance of Jack Ma, the Alibaba founder and the face of the new China that Xi claimed to be creating. The drama includes the shelving of Ant Group’s planned $35 billion initial public offering.

Even so, Xi will probably miss Trump. Biden is almost sure to re-enter TPP and grow its ranks—a potential nightmare for China’s leaders. He will call out Beijing’s labor, environmental and human-rights shortcomings. He will work to build economic muscle at home to compete with . And he’ll have the good sense to work with Asia to level playing fields, not against the region.

As chaotic as the last four years were for China, Biden won’t be the easy mark Trump was. Beijing may soon realize 2016-2020 was a golden era for getting a leg up on a U.S. shooting its economy in the foot.