Artificial Intelligence is going to change our world, that’s inevitable. But in what way it changes our world is still up to us.

And for LGBTQ people, often marginalised by traditional systems, we need to be wary of how AI could filter us out. Because if we don’t it could tell our story incorrectly, and leave us behind, as the technology expands.

Indeed, one expert in the field, anthropologist Mary L. Gray, believes AI will “always fail LGBTQ people.” She believes it will be up to us, to forever make sure AI not only reflects us, but the way we want our world to look too.

If you take AI down to its most basic level, the binary code of 0 and 1s, you can start to understand why it might ignore queerness. After all, we’re a community that at our foundation recognises, at least at some level, the fluidity of gender and sexual binaries.

Though it has changed and transformed, that understanding in our community is at the heart of our queer human experience. And it is the very fact that we grow and develop our identities, and our community, which means AI will struggle to understand us.

“We [LGBTQ people] are constantly remaking our communities. That’s our beauty; we constantly push what is possible. But AI does its best job when it has something static,” says Gray.

Recognised by the , Gray explores how the digital economy transforms labour, identity, and human rights.

So to understand why AI is, at least currently, set up to fail LGBTQ people, it’s essential to take a step back and understand that – like in all things – it sits within a system. And we can change systems. 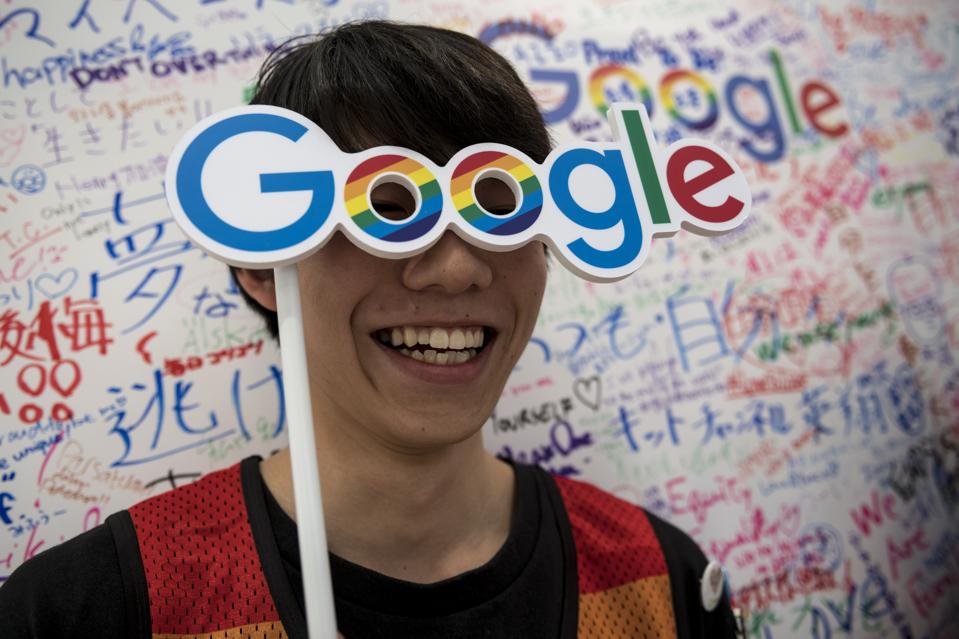 Participant wearing the glasses while google during the Tokyo Rainbow Pride in Tokyo, Japan, 06 May … [+] 2018. About 7000 people participated in the march, of sexual minorities of the LGBT (lesbian, gay, bisexual, and transgender) community and their supporters paraded through the streets of downtown Tokyo to promote a society free of prejudice and discrimination. (Photo by Alessandro Di Ciommo/NurPhoto via Getty Images)

“AI works best when it has priors”

Gray explains that at the most basic level, AIs build decision-making models by looking at existing or ‘staple’ decisions. Norms that AI then try to emulate.

“The problem is that what we build is the norm, the typical. By design, AI excludes and pushes to the margins anything that doesn’t have a robust example.”

And what do we know about queer individuals?

Yes, for some of us, particularly in a more welcoming world, we are now able to ‘strut out of the womb’ a ready oven-baked queer, happy with our sexuality.

But for so many others, we go on a journey to reach that end goal. It sees us using different labels that sometimes don’t even have the same definition for others. We do this as a way to define our very raw and authentic identity, to find our place in the world.

But all if this is far from a “staple” story that can be defined and categorised.

“There is no one way of being queer because queerness is an action, a way of rejecting assumptions about what we should do or be. There is no way to push against that force without carving a pretty unique path,” says Gray.

“Indeed, history teaches us; our identity isn’t a staple. That’s the beauty of our identity.” 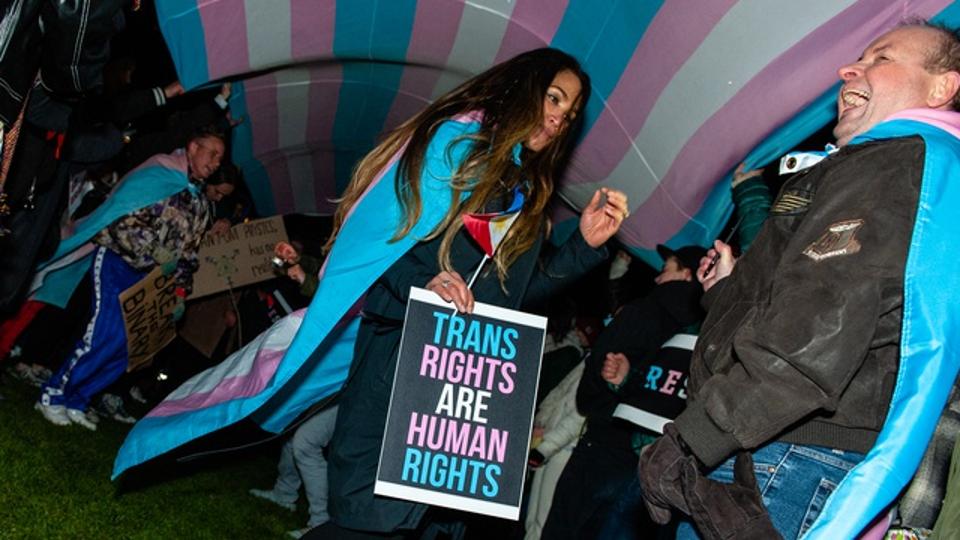 Rights groups and activists are mobilizing against a reported Trump administration plan to narrowly … [+] define gender, a move that could dramatically reduce federal protections for and recognition of transgender people on October 28th, 2018 in Amsterdam, Netherlands. In Amsterdam people gathered Sunday night during a rally which was a call-to-action to all to members and allies of the trans, LGBQIA, black and brown resistance, immigrant and social justice movements to stand side by side with trans men, trans women and non-binary & intersex people, and to send a message of resistance and strengthen around the world. (Photo by Romy Arroyo Fernandez/NurPhoto via Getty Images)

Alongside the simple fact that defining queer is impossible, AI currently relies on commercial data stacks. Data, which Gray says, sits in a system that also doesn’t always see our sexuality or a more fluid gender binary.

“Data is a commercial activity; that’s where most of AI knowledge comes from. It’s not entirely a bad thing, but it does limit us to being a consumer.”

And where data does go far enough to try and understand our community when led by commercial imperatives, it will paint a particular – mostly gay, while, male – picture:

“For example, the assumption we all live in cities. The narrative that the ‘good gay life’ is in a city. Most of the markers in this data are what we consume. But we are so much more than we consume.

“The raw facts could create the assumption in AI; that’s what we buy, how we live, and how we look. That’s why AI will fail us. We are a constantly complex universe of identities”

We are reaching this place, not because business is made up of flawed people at its core. It’s more nuanced than that.

It’s because systems and algorithms look to standardise us to improve and optimise for all users in a one size fits all approach. This, alongside the fact that we all have experiences (and privileges), we carry into the work we do and the systems we build.

“21st Century business has moved to automate because there is a belief in the power of technology to make our lives better.”

But you need only look as far as stories about dating sites creating a mostly white and attractive elite, or those about ethnicity filters, to see how this rush to optimise is leaving so many behind. 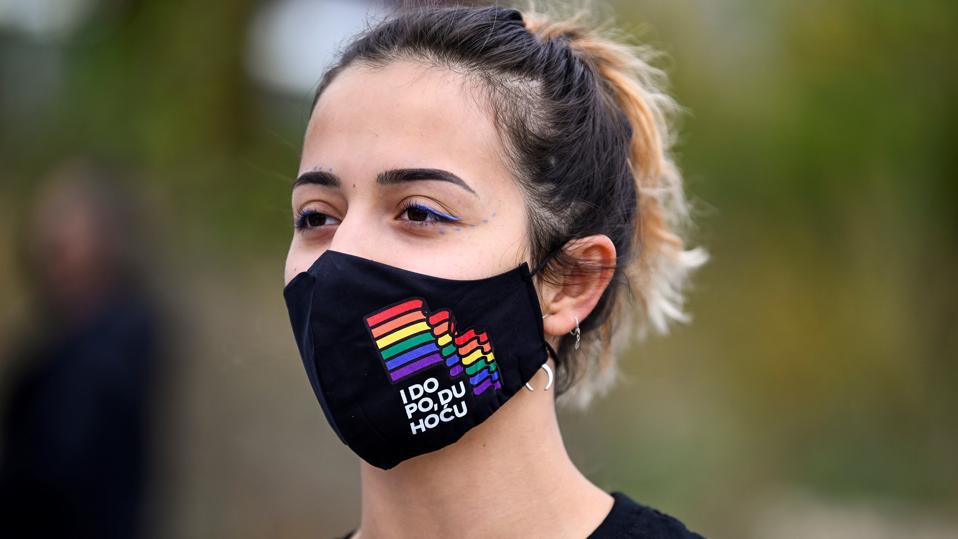 A woman wearing a face mask with the rainbow flag takes part in the lesbian, gay, bisexual and … [+] transgender (LGBT) Pride Parade in Pristina on October 12, 2020, demanding “freedom” and “equal rights” in a Muslim majority country with little tolerant views on sexuality. (Photo by Armend NIMANI / AFP) (Photo by ARMEND NIMANI/AFP via Getty Images)

We can all make sure Artificial Intelligence reflects us, especially LGBTQ people

It’s not all doom and gloom though, Gray’s work on the gig economy and ‘ghost’ or remote working – particularly timely given the current state of the world – shows that systems are actually in a constant state of flux.

The pandemic has been a chance for us all to reflect on what we once saw as ‘immovable states of play’ to ones that can change overnight.

As such, Gray believes we’re at a time of reckoning as AI tech surges. And it’s up to us as humans to make sure we build queer resilience into AI systems.

Particularly remembering that AI learns from us, we’ll need to teach it that humans are all different, instead of staples to be registered:

“It’s a chance to reflect on our choices. To ask when we are exclusionary. Think about your time on a dating app and ask what assumptions it’s making about who you might want to see based on what you do on the internet and online shopping.

“Why does it keep showing me the same white faces, what’s that about? What does it say about my social networks? We can reflect on any and all decision-making system. And we can reject that.”

“When AI whittles us down to one identity. We can look at that and say no. I’m more than that.”

And Gray believes that practically speaking, it also means completely changing how we set up the parameters in all our systems, including AI.

But if that feels out of reach for you, the good news is, there is something Gray says we can all do to see this change happen.

“As consumers, users and people who constantly feed into data and social media: We can all get out in the world and demand change. Speak up for Black Trans Women, for example.

“Because, yes, AI can tell us some things, about modelling, about the world we live in. And then it’s up to us to say; I want the world to look different. I want to queer it up!”

Indeed, we all have the power to change the world around us, even if it’s only one button, tap, or decision at a time.

Wake Up And Smell The Data: Why Did It Take A Pandemic To Recognize Our Data Problem?

Transforming The U.S. Military For The 21st Century