Can Your Smartphone Handle The Coming ‘New’ 5G?

(Note: This story originally appeared in . Get all the good stuff first by . Release Notes drops each Tuesday morning.)

Did you buy a 5G smartphone a year or two ago, planning to get ahead of the curve early and get those fast, super-sweet speeds. I’ve got bad news for you: Starting later this year, the curve will have passed you by.

That’s because the next iteration of 5G coming in late 2021 and early 2022 will have new frequencies that most older 5G phones won’t recognize. They’ll use a radio spectrum known as C-Band, and here’s how valuable it is: In the recent Federal Communications Commission auction for licenses on that spectrum, cellular carriers together spent more than $81 billion dollars.

It’s a big deal because it fills in a gap for both AT&T and Verizon in their 5G service offerings.

Both carriers kicked off their 5G parties with a high-frequency flavor known as millimeter wave, or mmWave. That’s the variant of 5G that offers the spectacular speeds you’ve likely heard in all the hype, with the capability of hitting download speeds of well over 1 gigabits per second.

But those signals can’t go very far, and can’t pass through solid objects, including buildings and even foliage. In most cases, mmWave is confined to areas where people gather – such as stadium, parks, airports etc. – though in some cities, such as Houston, Atlanta and Chicago, Verizon is expanding it into neighborhoods.

AT&T and Verizon both have since launched a 5G service that operates at lower frequencies, similar to their existing, older LTE networks, which travels farther and can penetrate buildings. In fact, those so-called “nationwide” 5G service work by sharing frequencies with 4G LTE. Owners of 5G-capable phones can access them, typically at no extra charge. However, those networks don’t perform much better than LTE, and in some instances . The carriers say that will improve as more resources are shifted from LTE to 5G on those shared frequencies.

The C-Band frequencies travel farther than mmWave and are better at getting through solid objects, but they don’t have the range or the penetration capabilities of the lower frequencies. C-Band speeds approach 1-Gbps speeds, providing a boost AT&T and Verizon both need.

“When you look at the speeds such as in a more mature 5G network like in Seoul, South Korea, they are getting speeds between 500 megabits per second to 1 Gbps easily utilizing that (C-Band) spectrum,” said Andre Fuetsch, AT&T’s chief technical officer for network services. “So we think that that’s a pretty good offering to have for customers.” 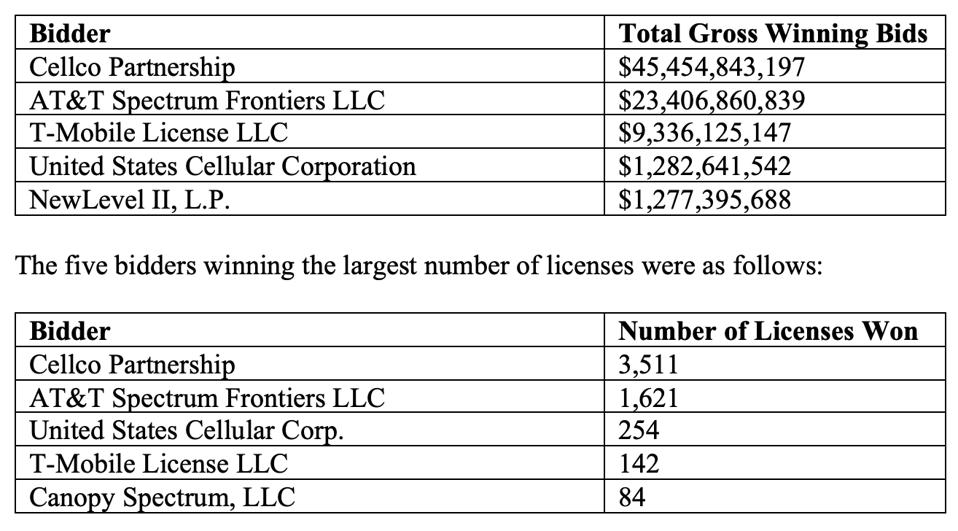 The results of the FCC’s C-band auction shows Verizon (Cellco Partnership) winning the most … [+] licenses. FCC

Meanwhile, competitor T-Mobile has a 5G offering that includes all three “layers” of 5G: some mmWave, lots of lower-frequency spectrum and a good chunk of mid-band frequencies it got with its acquisition of Sprint. Those aren’t C-Band frequencies, but they’re in the same ballpark in terms of speed. T-Mobile’s mid-band 5G is active in much of Houston, where I live, and I’ve seen download speeds in the 200-300 Mbps range when I come across it using my iPhone 12 Pro Max.

In the FCC auction, which , Verizon spent $44 billion and AT&T $23 billion for C-Band licenses. They will begin deploying this service late this year and early next, but many early adopters of 5G will miss out. (T-Mobile spent more than $9 billion to acquire a smaller number of C-Band licenses to fill in some regional gaps in its mid-band holdings.)

More will come later, including Samsung’s budget A32, which should cost around $300. And Verizon executives said this week they expect to have more than 20 different C-Band phones available on their network by the end of 2021.

If you are in the market for a smartphone this year, whether it supports C-Band service should be high on your list. Fortunately, if you buy an iPhone 12 or brand-name Android phones introduced this year, it looks like snapping one up will be easy to do.

Verizon, T-Mobile And AT&T Lay Out Vision For Future Of 5G In US

Spirent Report Highlights What 5G Has In Store For 2021